By Keith Griffith For Dailymail.com and Wires

Hurricane Isaias snapped trees and knocked out power as it ripped through the Bahamas on Saturday and headed toward the Florida coast, where officials are sterilizing evacuation centers and stocking them with protective gear in a desperate bid to avoid spurring new cases of coronavirus in the already hard-hit state.

‘Preparations to protect life and property should be rushed to completion,’ the National Weather Service said in a flash bulletin on Saturday. ‘Hurricane conditions are expected to reach the coast within the hurricane warning area in Florida tonight and will spread northward through Sunday.’

Landfall is expected in South Florida by 8pm on on Saturday, and storm tracks predict the hurricane will veer north along the coast, threatening Georgia and the Carolinas on Sunday into Monday, and reaching New York City as early as Tuesday. 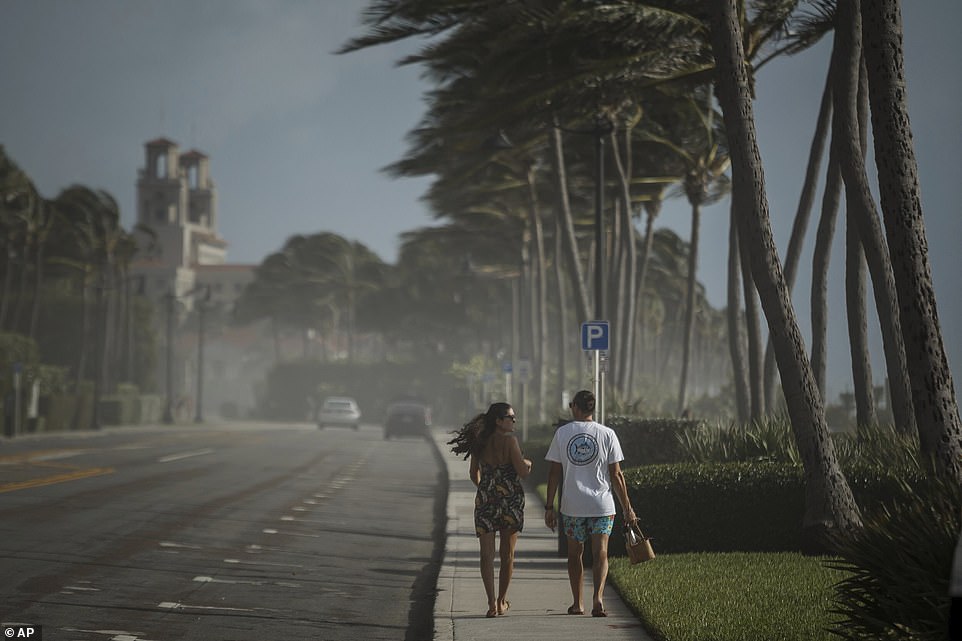 Sea spray, sand and winds sweep across South Ocean Boulevard in Palm Beach on Saturday as Isaias bears down 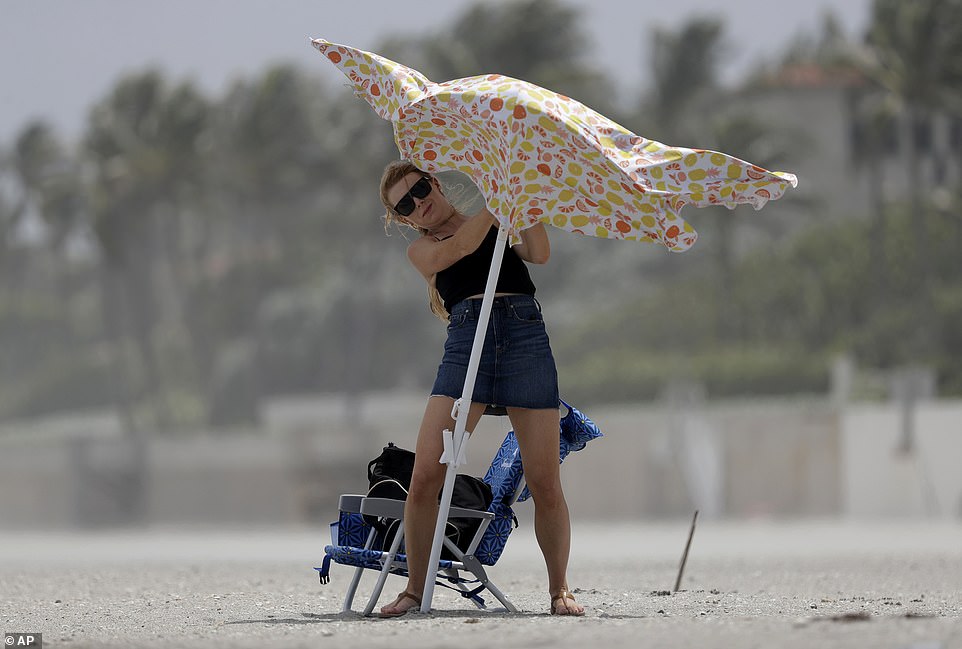 A beach goer attempts to set up a beach umbrella Saturday in Palm Beach, Florida as the outer bands reach the state 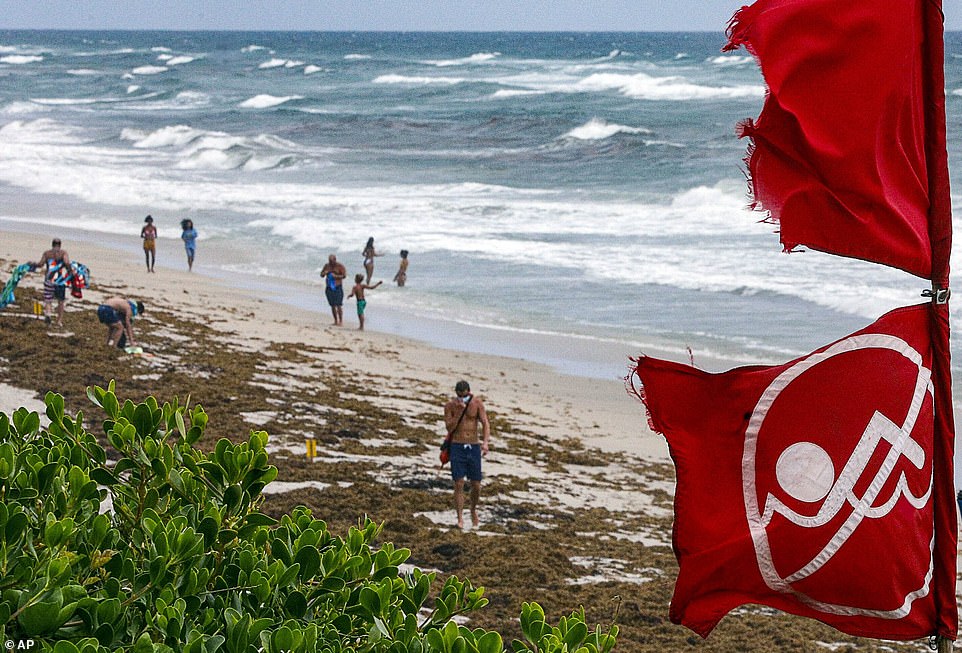 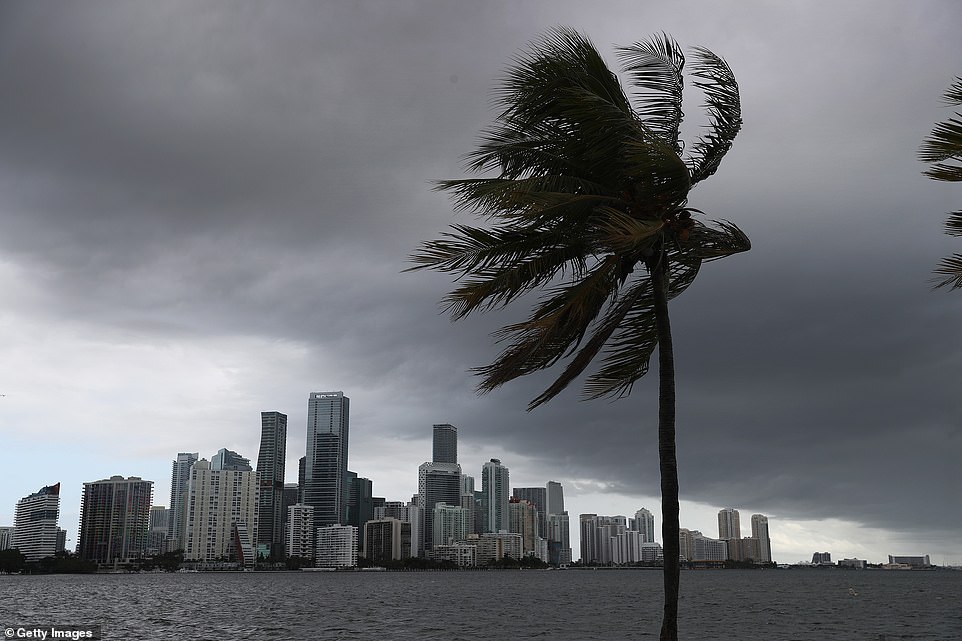 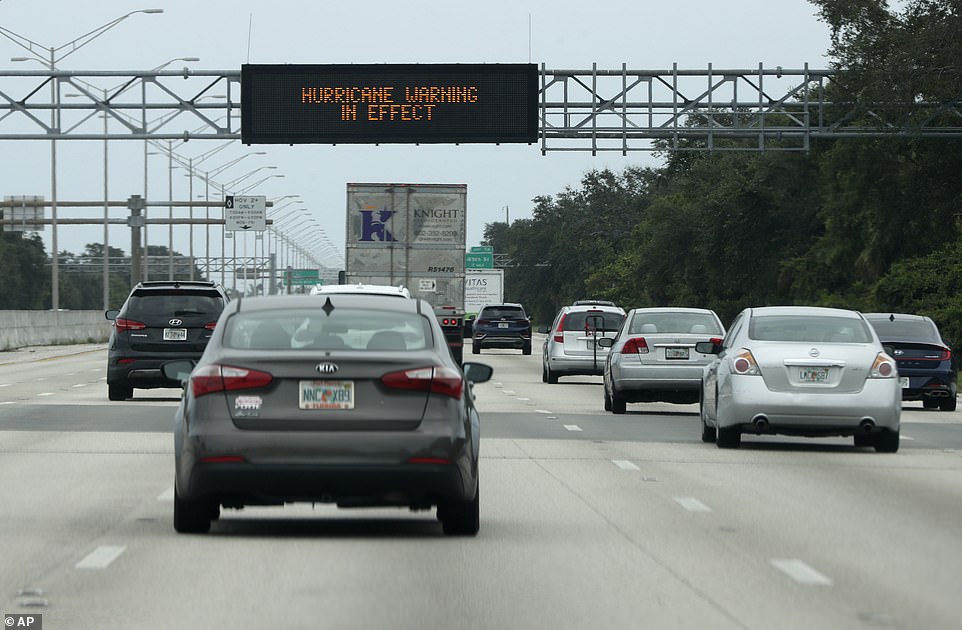 Florida authorities said they have prepared shelters, but didn’t expect to have to evacuate people.

‘The most important thing we want people to do now is remain vigilant,’ said Gov. Ron DeSantis.

Isaias had maximum sustained winds of 80 miles per hour at 11am Saturday morning, a slight decline from earlier in the day, the U.S. National Hurricane Center said.

Florida’s well-honed hurricane responses have been partly upended by its grappling with one of the country’s worst outbreaks of the novel coronavirus.

The emergency operations center in Miami, usually a beehive of activity ahead of a storm, was mostly empty with plastic dividers set up between work stations and fans with ultraviolet lights hung around the room in the hope of eradicating any floating virus particles. Many emergency officials are instead working remotely.

‘It’s not a perfect system,’ said Frank Rollason, Miami-Dade’s director of emergency management, ‘but what we’re facing to today with COVID, we’re trying to avoid packing all of those people into the emergency operations center.’ 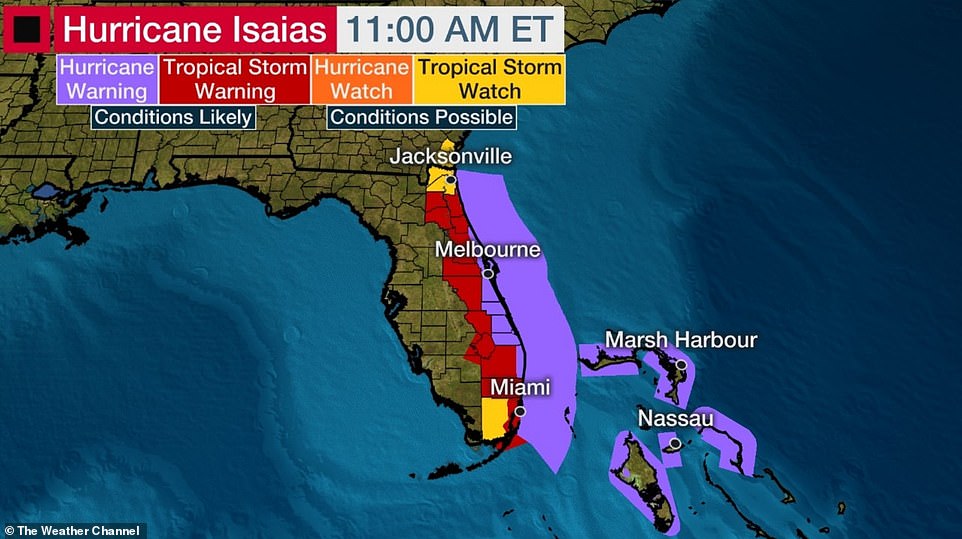 Much of Florida’s Atlantic coast was under a hurricane watch on Saturday, as Isaias bore down on the state 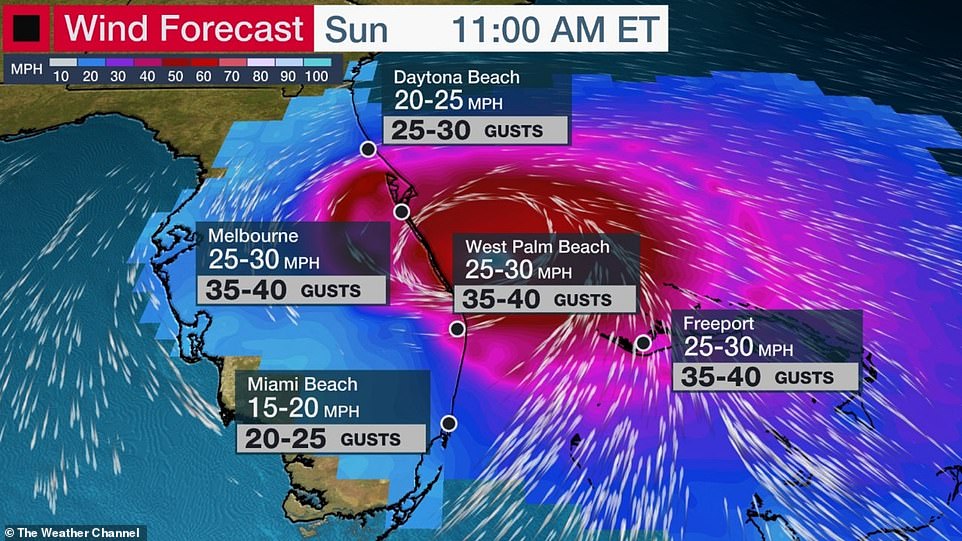 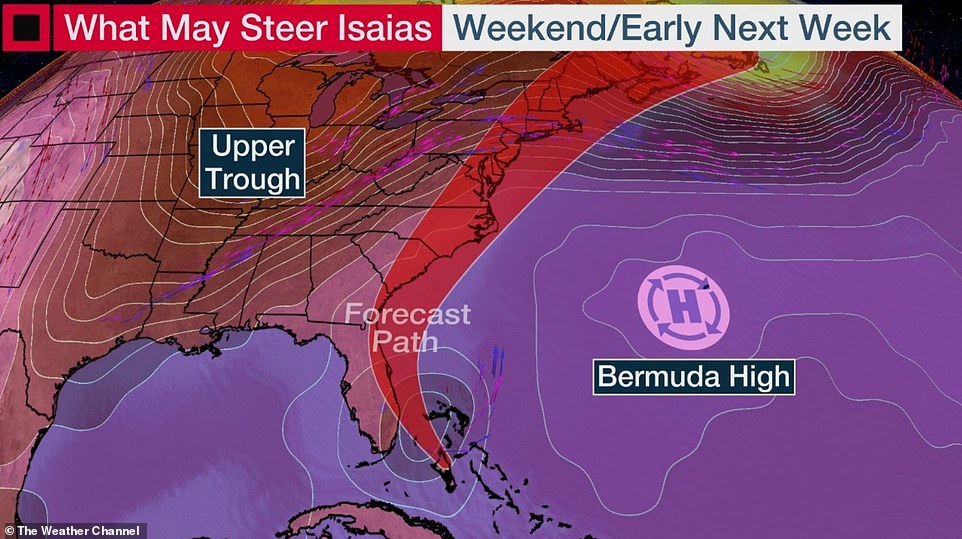 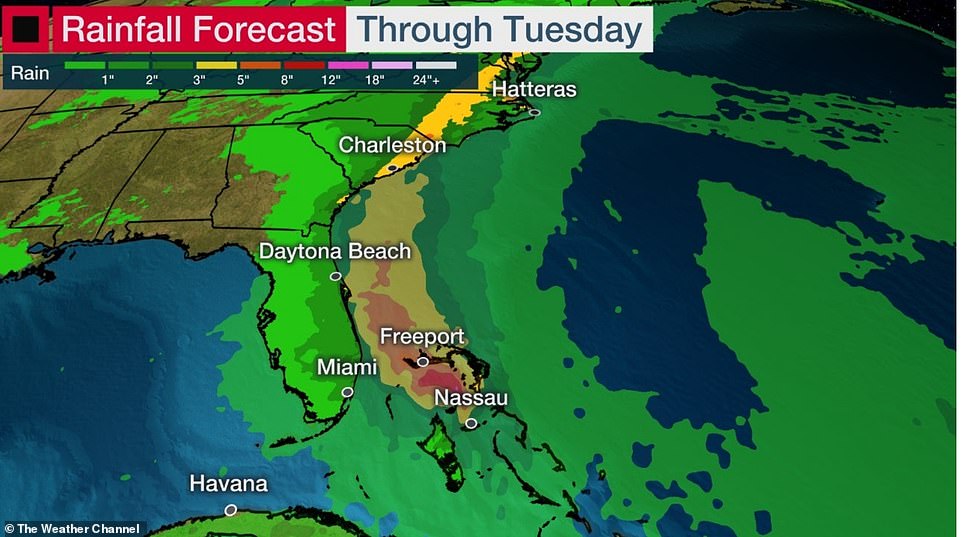 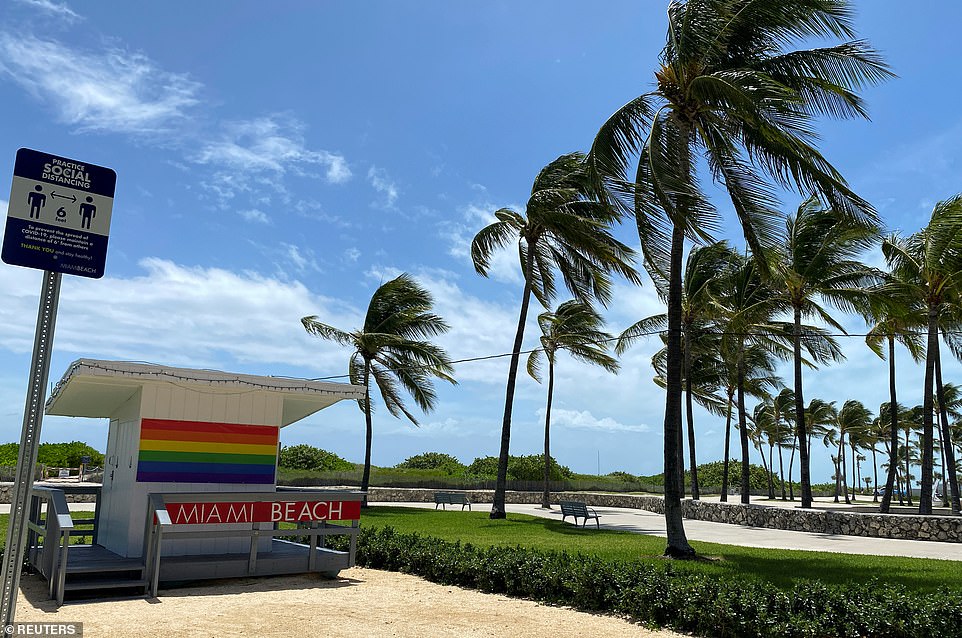 Though there were fears the hurricane would delay the return of a historic mission to the International Space Station, NASA said on Friday that separation and splashdown would go forward as scheduled.

Astronauts Doug Hurley and Bob Behnken took part in a farewell ceremony Saturday at the International Space Station, several hours ahead of their planned departure on a SpaceX Dragon capsule.

Splashdown is set for Sunday afternoon in the Gulf of Mexico, and will be the first splashdown for astronauts in 45 years.

The state was ‘fully prepared for this and any future storm during this hurricane season,’ DeSantis said, with stockpiles of personal protective equipment, generators, bottled water and meals ready to be distributed.

But DeSantis said state-run coronavirus testing sites would be closed in areas where the storm might hit.

‘Our sites, because they´re outdoors with tents, if it were to get 40-, 50-mile-per-hour winds, it would just collapse,’ he said. ‘Safety is paramount for that.’ 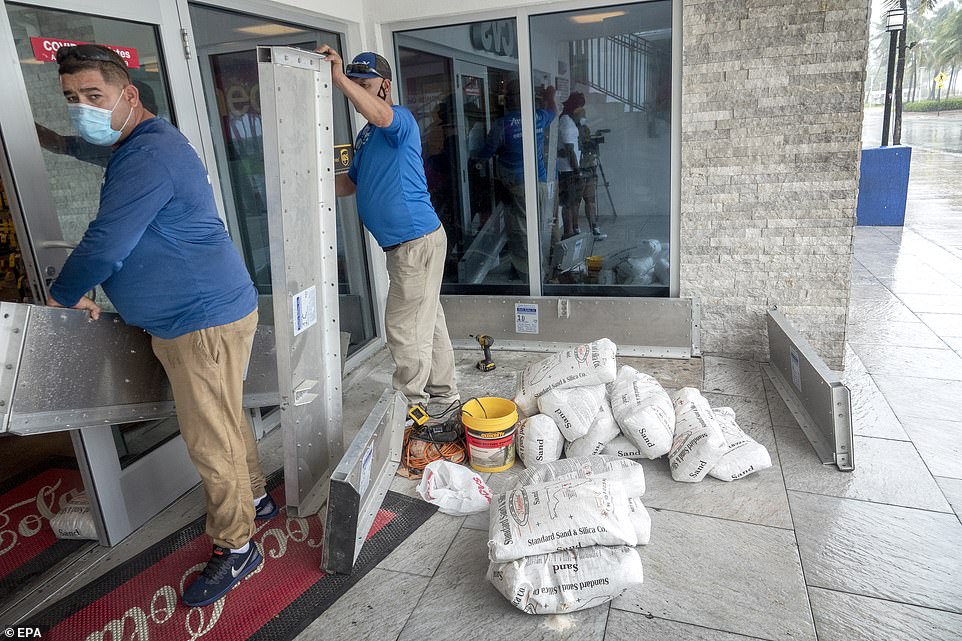 Workers install panels and sand bags at the entrance of a CVS Pharmacy in Miami Beach, Florida on Saturday 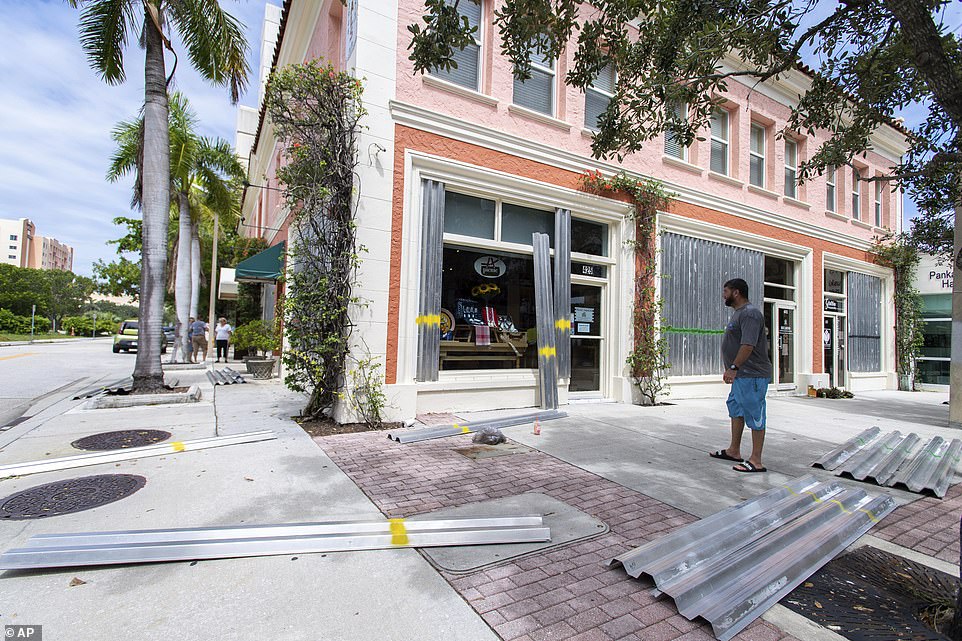 Bonnie Gruner’s employees help board up the building she manages at in downtown West Palm Beach, Florida on Saturday 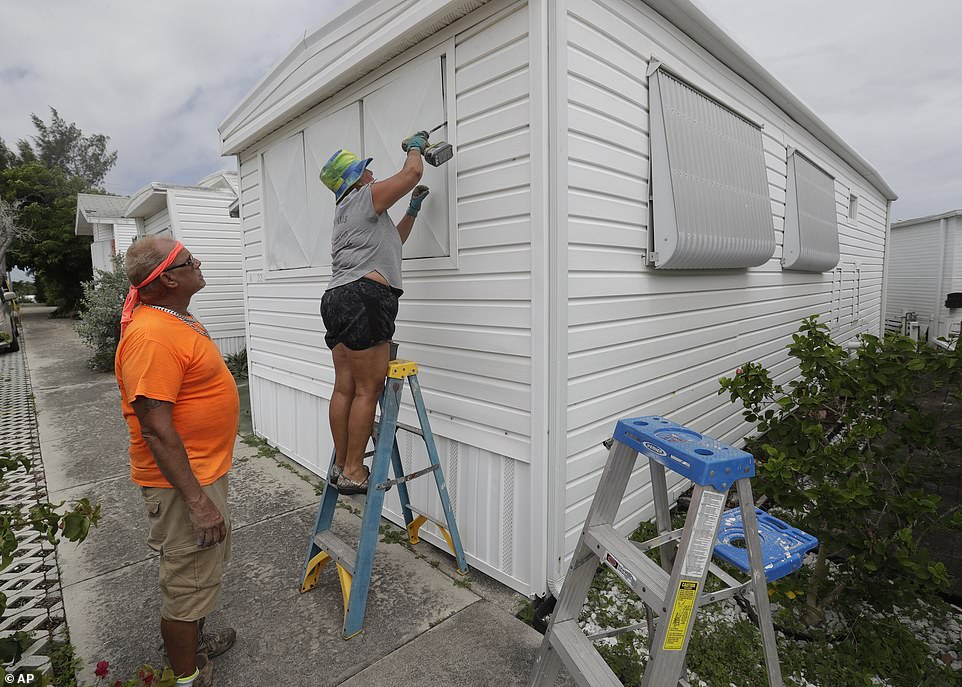 Chris Nagiewicz, left, watches as his wife Mary screws in a hurricane panel on Saturday on a trailer home in Briny Breezes, FL 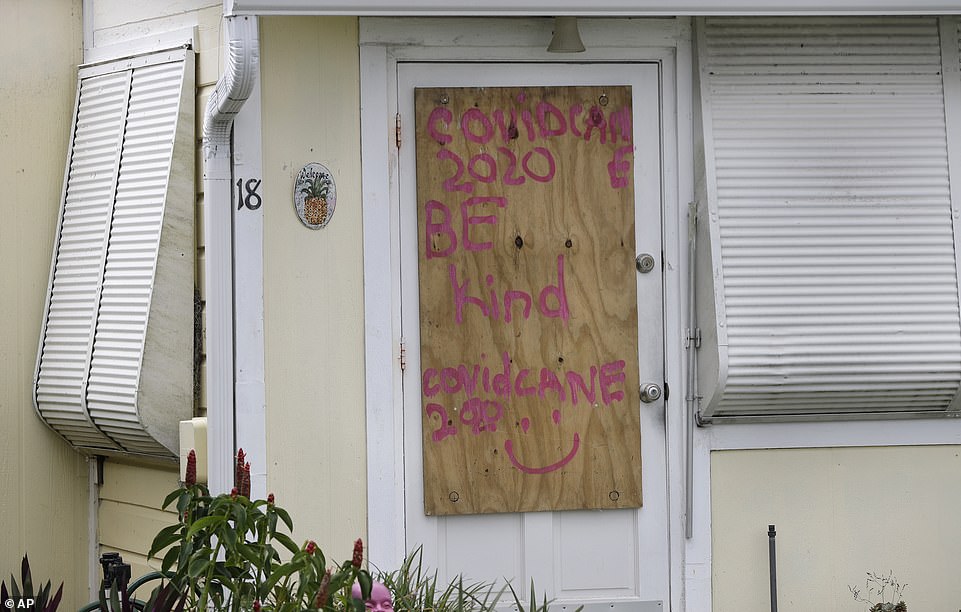 A boarded up home is shown Saturday in Briny Breezes, Florida. Hurricane Isaias is headed toward the Florida coast, where officials have closed beaches, parks and coronavirus testing sites 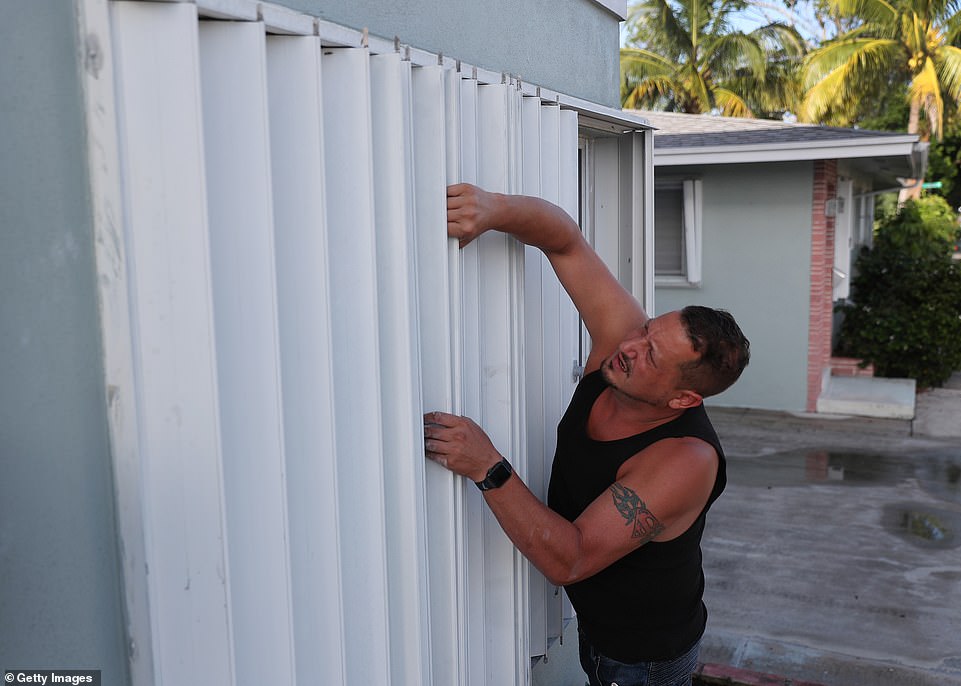 Anthony Perrone pulls the hurricane shutters closed on his home on Friday in Lake Worth, Florida. Perrone said he closed the shutters to prepare his home for the possible arrival of Hurricane Isaias

The closure of COVID-19 testing sites is concerning in a state that has been a hot spot in the United States in recent weeks. The pandemic forced officials to wrestle with social-distancing rules at the same time as disaster response.

Miami-Dade Mayor Carlos Giménez said each person in shelters needed to have 40 square feet and no more cafeteria-style dining would be allowed.

Any evacuees infected with the new coronavirus will be isolated in classrooms separate them from the general population, Giménez said.

Meanwhile, officials in the Bahamas cleared people out of Abaco island who have been living in temporary structures since Dorian devastated the area, killing at least 70 people. 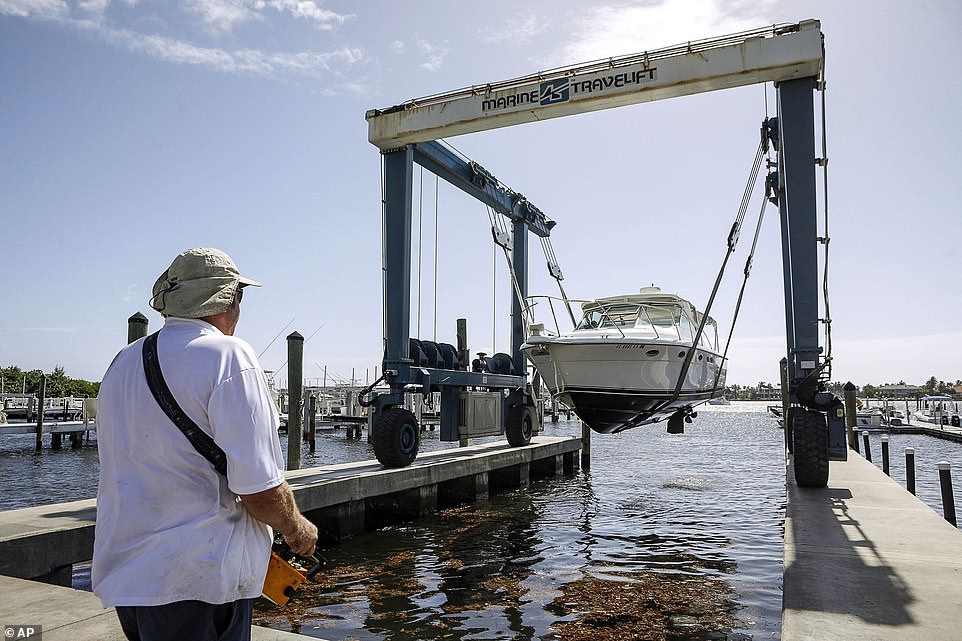 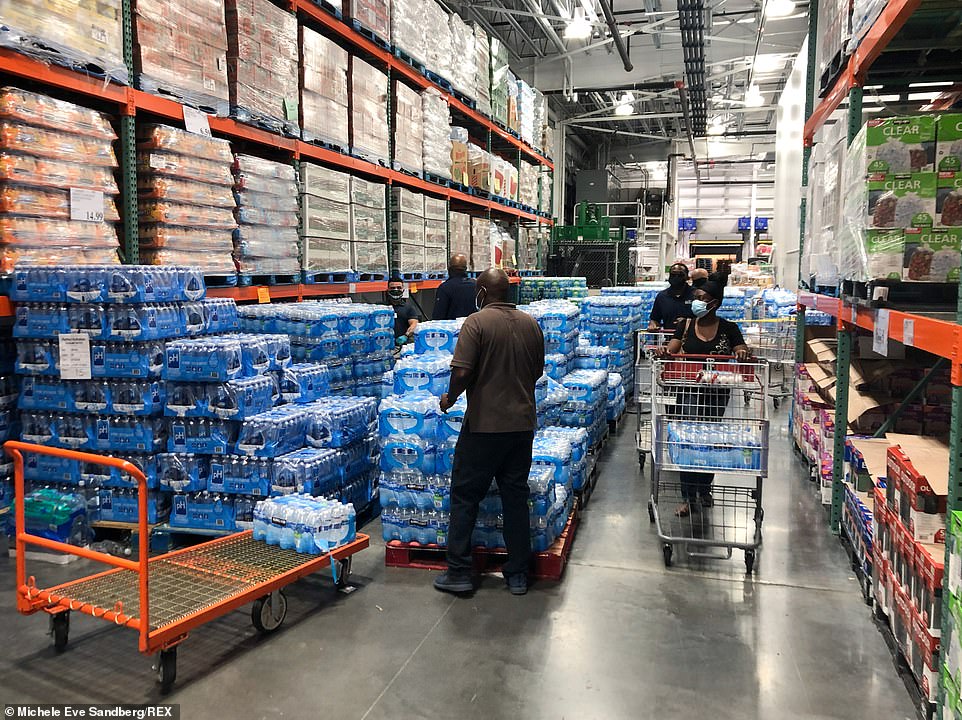 People are seen stocking up on water, in preparation for the storm in Miami on Friday. Hurricane advisory in effect for the Southeast coast of Florida. Hurricane Isaias is expected to hit South Florida in some areas as a category one on Saturday. 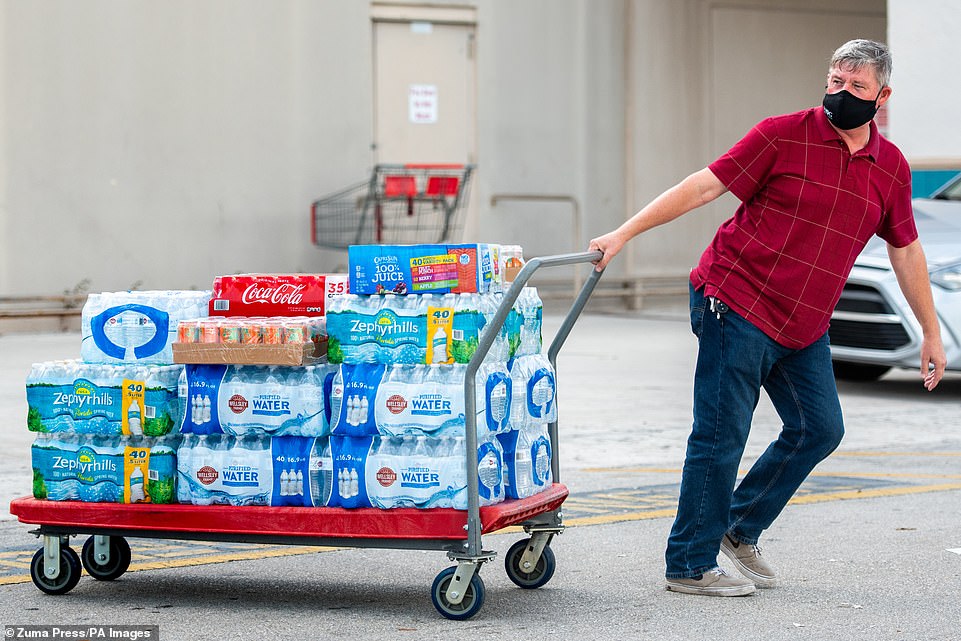 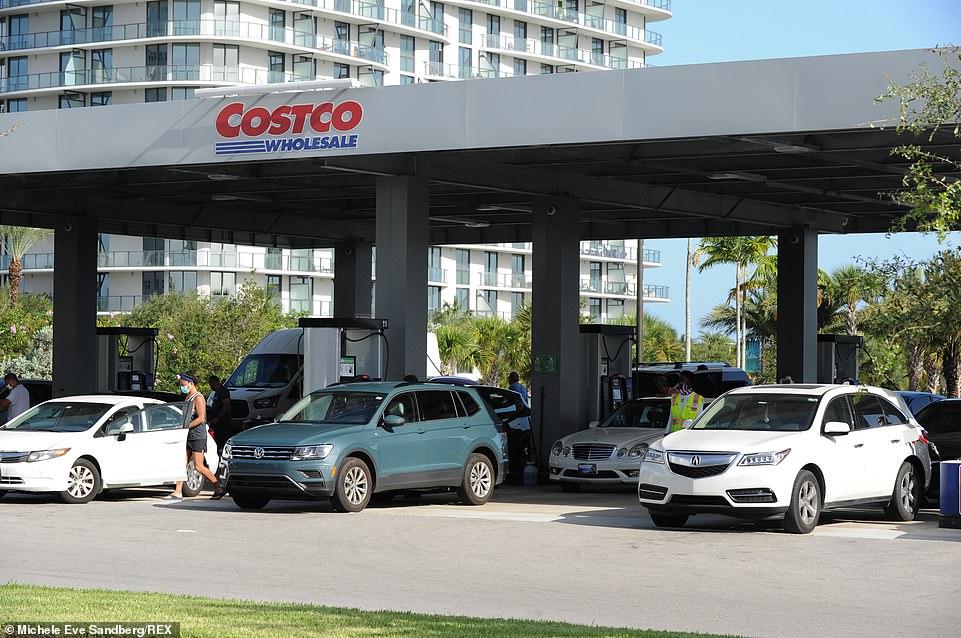 A hurricane warning was in effect for northwest Bahamas. Isaias was expected to drop from 4 to 8 inches of rain in the Bahamas and the Turks and Caicos Islands.

Bahamian officials said they were concerned about a Category 1 storm hitting amid the coronavirus pandemic.

‘The center of COVID-19 now is in Grand Bahama,’ the island´s minister, Sen. Kwasi Thompson, told government-run ZNS Bahamas. ‘No one wanted to see a situation where we are now facing a hurricane.’

Paula Miller, Mercy Corps director for the Bahamas, told The Associated Press that people on the island were still standing in line for gas on Saturday ahead of the storm.

The area was still recovering from Dorian, complicating preparations for this one.

‘People are doing the best they can to prepare, but a lot of businesses still have not fully repaired their roofs or their structures,’ she said. ‘Even a lower level storm could really set them back.’ 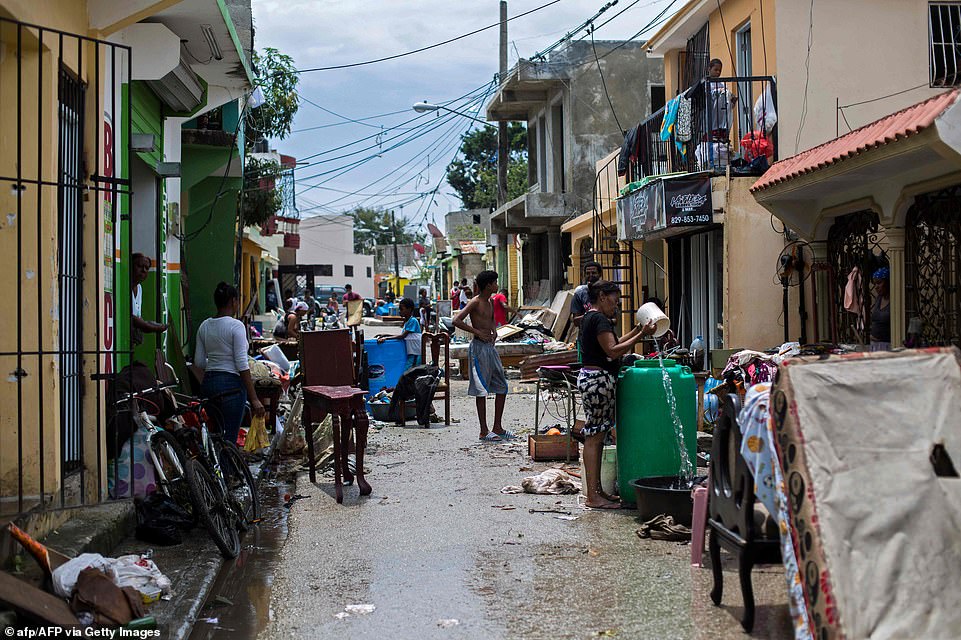 People in the Dominican Republic clean and dry their belongings after the passage of tropical storm Isaias, with which heavy rains caused the overflowing of the Magua River in Hato Mayor 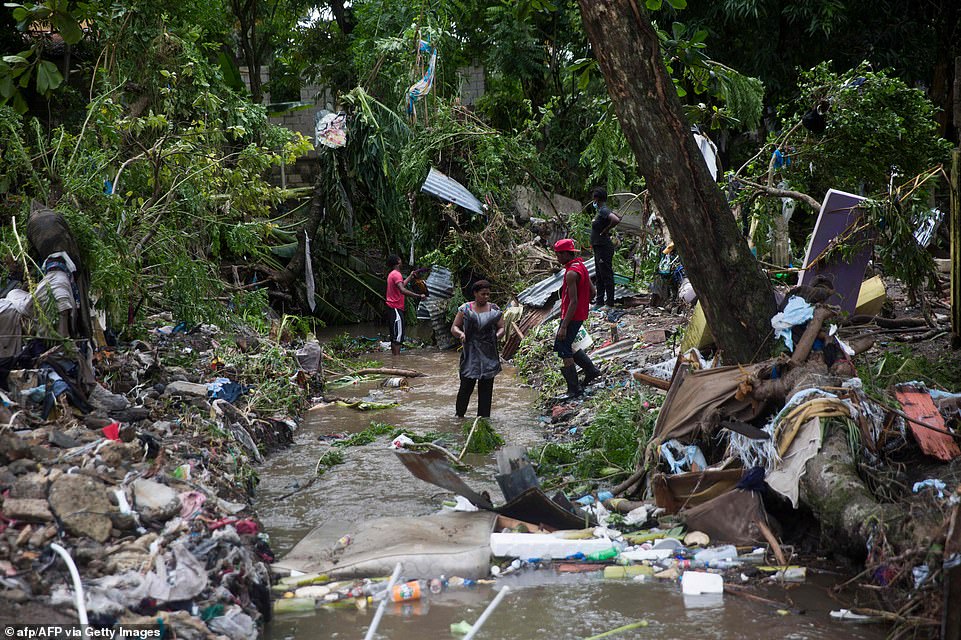 Locals try to rescue their belonging after the overflow of the Magua river caused by heavy rains caused during Isaias storm in the city of Hato Mayor, northwest of Santo Domingo, Dominican Republic 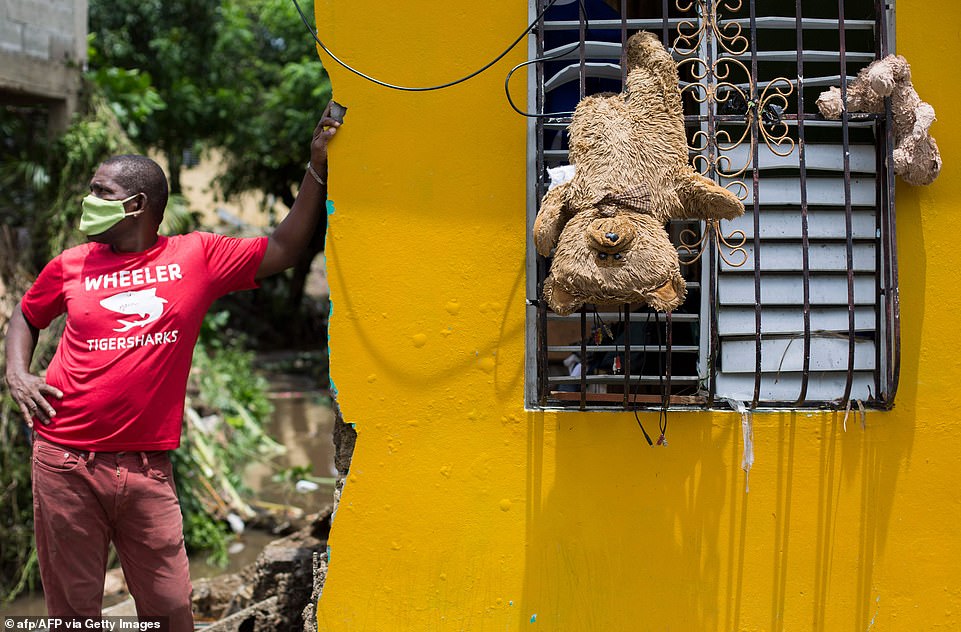 A man remains outside his home, where teddy bears were hanged from a window to dry after the passage of tropical storm Isaias, with which heavy rains caused the overflowing of the Magua River in Hato Mayor, Dominican Republic

In the Bahamas, Prime Minister Hubert Minnis relaxed a coronavirus lockdown as a result of the storm, but imposed a 10pm to 5am curfew. He said supermarkets, pharmacies, gas stations and hardware stores would be open as long as weather permitted.

The Bahamas has reported more than 570 confirmed COVID-19 cases and at least 14 deaths. It recently barred travelers from the U.S. following a surge in cases after it reopened to international tourism.

On Thursday, while still a tropical storm, Isaias toppled trees, knocked out power, destroyed crops and caused widespread flooding and small landslides in the Dominican Republic and Puerto Rico.

One man died in the Dominican Republic, where more than 5,000 people were evacuated, hundreds of homes were damaged or destroyed and more than 130 communities were cut off by floodwaters.

In Puerto Rico, the National Guard rescued at least 35 people from floodwaters that swept away one woman who remained missing.