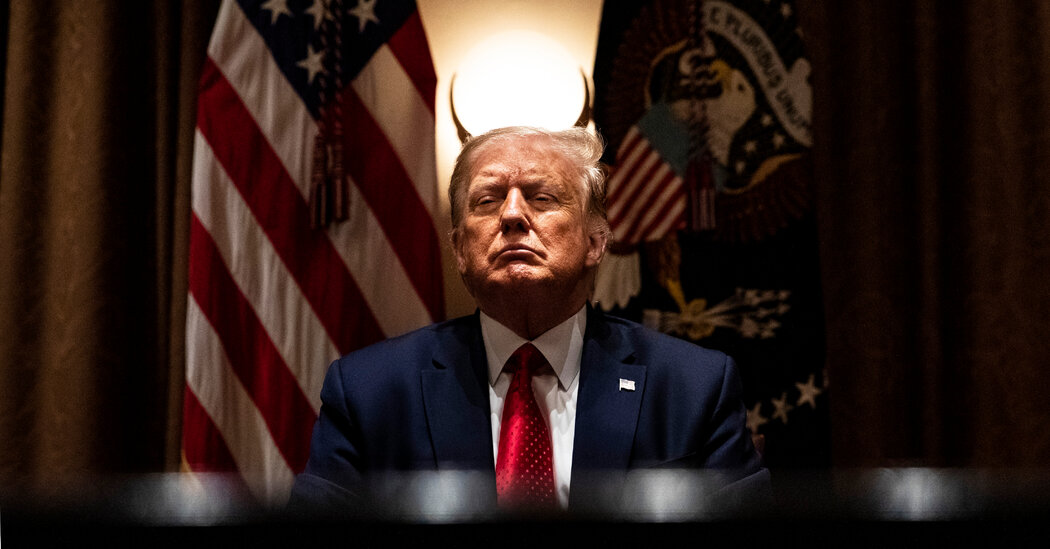 WASHINGTON — Macbeth has his doubts.

But his wife taunts him about his manliness until he bloodies his country.

It’s hard to believe, four centuries after Shakespeare, that the fear of being unmanned is still so potent that it could wreck a country.

Donald Trump’s warped view of masculinity has warped this nation’s response to a deadly pandemic. And Trump doesn’t even have a diabolical Lady MacTrump whispering in his ear, goading him about being a man. He goads himself, fueled by ghostly memories of his autocratic father.

As the Shakespeare scholar Stephen Greenblatt writes: “The tyrant, Macbeth and other plays suggest, is driven by a range of sexual anxieties: a compulsive need to prove his manhood, dread of impotence, a nagging apprehension that he will not be found sufficiently attractive or powerful, a fear of failure. Hence the penchant for bullying, the vicious misogyny, and the explosive violence. Hence, too, the vulnerability to taunts. Especially those bearing a latent or explicit sexual charge.”

Trump’s fear of emasculation led to his de-mask-ulation. Instead of cleaving to science and reason, he stuck with the old, corny Gordon Gekko routine, putting concern for the stock market above all else.

Like Macbeth, the president made tragic errors of judgment and plunged his country into a nightmare. Our trust in government is depleted, and our relationships in the world are tattered. As Fintan O’Toole wrote in The Irish Times, the world has loved, hated and envied the United States. But never before has it pitied us. Until now.

Trump has always said that the whole world is laughing at us because it’s taking advantage of us. That sound you’re hearing is not laughter.

“He could be on his way to re-election now if he had done what many of the governors did and followed science and public health advice and if he had leveled with people about what the requirements were and why,’’ says David Axelrod, the former Obama strategist. “If he had done those things, the country would have responded and been in a much better place.

“But he didn’t have the emotional capacity to do it. At a minimum, it’s Shakespearean. It’s almost biblical.”

Even Trump’s allies are baffled about why he can’t fake a sense of compassion and competency. He has made enough cheesy movie cameos — even one hawking cheese-stuffed Pizza Hut crust — that he should know how to pretend to be halfway human.

Now the president is threatening another crisis, tweeting that we might have to delay the election because there could be mail-in voting fraud.

The Washington Post reports that backlogs at the U.S. Postal Service are causing some employees there to worry that the Trump lackey in charge, a top donor, is intentionally gumming up the works just in time for the election. It is astounding the corrupt lengths the administration seems willing to go to — destroying the Postal Service to win the election. Ben Franklin would be incensed.

As Axelrod notes, “Whatever happened back in the Bush v. Gore recount days will seem like the Garden of Innocence compared to what’s going to happen now. Trump is not going to walk to the rostrum and say, ‘The people have spoken and I accept their verdict.’’’

Even Trump’s closest allies in Congress, Mitch McConnell and Kevin McCarthy, couldn’t stomach the idea of postponing the election, and both have swallowed a lot over the last three years. Trump’s little trial balloon blew up like the Hindenburg.

Alexander Burns wrote in The New York Times that Trump was too pathetic to be a tyrant: “Far from a strongman, Mr. Trump has lately become a heckler in his own government, promoting medical conspiracy theories on social media, playing no constructive role in either the management of the coronavirus pandemic or the negotiation of an economic rescue plan in Congress — and complaining endlessly about the unfairness of it all.”

Talk about unfair: The one thing holding the country together has been the additional $600 per week in unemployment benefits that has allowed millions to pay the rent and fill the fridge. Republicans, though, are so convinced that the few extra hundred dollars in jobless pay is keeping people from work that they are loathe to renew it. Unless Congress gets it together soon and finds a way to extend the aid, the country is going to be facing a catastrophe of homelessness and need that makes these past few months look pleasant.

After the president began doing the coronavirus briefings again, he tried a “new” tone, saying he was getting used to masks — “Think about patriotism. Maybe it helps. It helps” — then face-planting by offering good wishes to a past party pal and accused pedophile enabler, Ghislaine Maxwell. But then things got really crazy as he defended a retweet of a doctor who has promoted hydroxychloroquine as well as declaimed on the existence of alien D.N.A. and demon sperm.

“I thought her voice was an important voice, but I know nothing about her,’’ he told reporters. (As he told Barstool sports: “It’s the retweets that get you in trouble.”) He fell into more self-pity, complaining about his ratings compared to those of Dr. Anthony Fauci: “Nobody likes me. It can only be my personality, that’s all.”

It has been clear for some time that Trump’s Panglossian attitude toward the virus was turning him into a public health menace.

But this week, the culture war over masks crystallized with the death of Herman Cain. The former Republican presidential candidate, who dissed masks and Covid restrictions, proudly tweeted a picture from the Trump rally in Tulsa, surrounded by his fellow mask-less friends. “Having a fantastic time,” he wrote. Nine days later, he tested positive for corona. As we have learned, this virus often has the final say.

Right away, White House officials knew that this death would be laid at Trump’s feet. They began warning reporters that they should not politicize Cain’s death.

At the Friday White House briefing, asked if officials were concerned that the 74-year-old Cain may have contracted the virus at the rally, Kayleigh McEnany replied, “We’ll never know,” and sanctimoniously added, “I will not politicize Herman Cain’s passing.’’

But it is undeniable that Trump politicized masks and set a lethal example.

As Jeremy Peters wrote in The Times, Republican officials all over the country “have adopted a similar tone of skepticism and defiance, rejecting the advice of public health officials and deferring instead to principles they said were equally important: conservative values of economic freedom and personal liberty.”

So conservatives are willing to embrace a new ethos? Give me liberty. And death.

The Times is committed to publishing a diversity of letters to the editor. We’d like to hear what you think about this or any of our articles. Here are some tips. And here’s our email: [email protected].