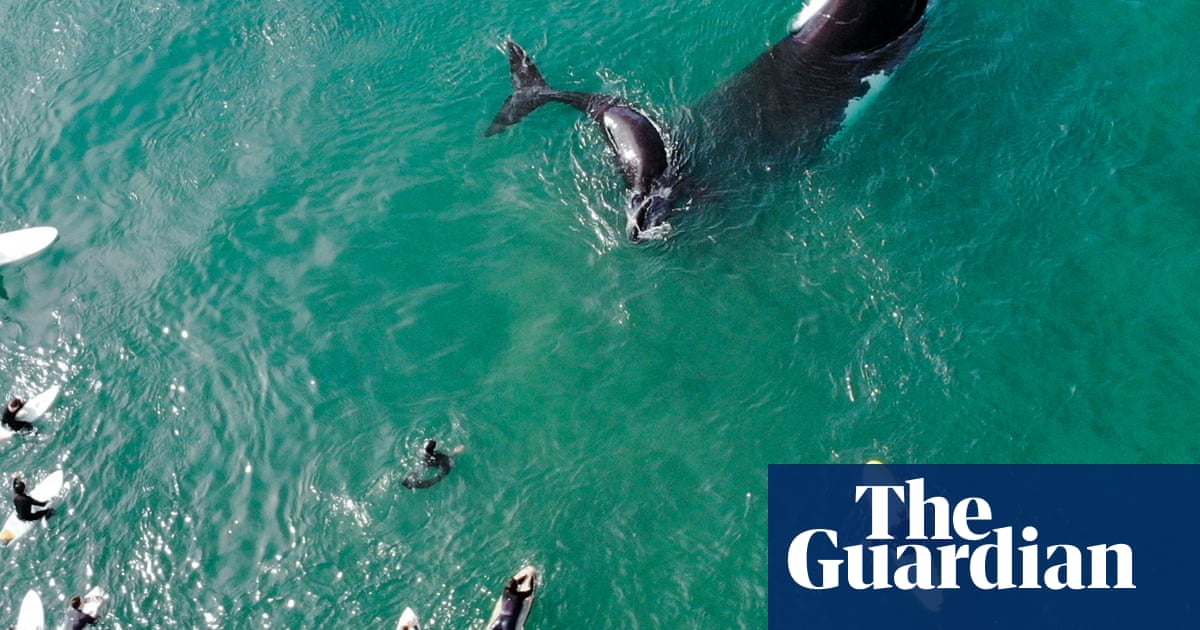 A humpback whale calf, closely followed by its mother, came within metres of surfers and swimmers at Manly beach, in Sydney’s north, on Sunday afternoon.

It is unusual to see a whale calf so early in the year in Sydney. Eastern Australian humpbacks migrate north from Antarctica, along the coast to tropical waters in north Queensland from April to July.

The whales give birth in the warmer waters and often mothers and calves are spotted heading south during the latter part of the Australian spring.

One boardrider, Josh, told Guardian Australia he had never seen a whale, particularly a calf, come so close to the beach at Manly.

“There was a bit of pointing going on and I looked round and the little one was just there,” Josh said.

“Then mum came in pretty quick smart, I think when she realised how close people were.

“You often see [whales] further out the back but this one just came right up to where people were hanging on their boards.”

Images show dozens of surfers watching from about 10m from the mother humpback and calf.

Initially there was some concern that one of the whales had been caught in a shark net, but surfers said that was not the case.

“I think everyone was just paddling up to get a good look. It’s the sort of thing you won’t forget seeing.”

Last week researchers from the University of NSW found that while whale watching season in Australia is often a tourism drawcard, many humpbacks were not in optimum health during the return leg of the migration.

The researchers collected and analysed samples of whale blow – similar to mucus from a human nose – and found “significantly less” microbial diversity and richness on journey south.

Their paper, published in the journal Scientific Reports, said this indicated the whales were likely in poorer health than when their journey began.

“Although humpback whale stranding events occur naturally and regularly to injured and young whales, it is crucial to monitor the population health of this iconic species to ensure its long-term survival.

“Humpback whales do not only play an essential role in their marine ecosystem but also represent an important economic resource because whale-watching is a booming industry in many Australian cities and around the world.”